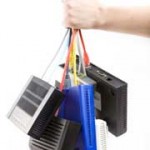 In this era of technological wonders, we are enjoying the benefits that come from the plethora of useful gadgets and devices we have been introduced to. Laptops, desktop computers, smartphones – all of this technology is used today to help us stay in touch with people we know and love, make new connections with people we don’t know, and simply said, socialize with all the people around us. The Internet has made things even simpler in this department, and we now have dozens of social networking websites where people can chat with their friends, share photos and contact with whomever they want to. However, the modern technology, and especially the Internet seem to be causing just the opposite, owing to the fact that more and more people are spending more time than they should in front of their computer screens.

An Internet Addiction – How Much Time Do You Spend Online?

It is very important to note that the longer the Internet exists, the more accustomed people are getting to it. While there is nothing wrong with spending a couple of hours more than you had initially planned on the Internet, there is still a limit between what is enough and how much is too much time spent on the Internet. The moment you see your job is endangered, or you are becoming distant to your loved ones, is the sign that your Internet usage is excessive. It needs to be taken into account that anything that you overly do isn’t good, and according to many people, too much of any activity can be classified as an addiction. The Internet is not an exception, and many people are addicted to the World Wide Web.

What Are Different Types of Internet Addiction?

There are several different types of Internet addictions, the first of them being related to the time people spend online. While on the Internet, people can develop a few different addictions such as cybersex and cyber relationships addiction, both of which are related to creating intimate relationships online. In this case people spend most of their time watching adult content, or in regard to the latter addiction – hanging out in chat-rooms. However, all of this is done in an excessive way, and in most cases it affects the relationships people have in their real life.

Another Internet addiction is more financial in nature, and it is demonstrated by using gambling and auction sites, for example. It affects one’s financial situation in a negative way. It is a widely known fact that the Internet offers a wealth of information, and this is in most cases helpful. However, some people tend to receive too much information, and easily get fed up with it. Finally, there is an addiction that doesn’t involve people going online, but it is developed while they are offline. Most commonly, people spend too much time behind their computer screens playing an offline game, for example.

In a nutshell, it is important to get rid of all the Internet addictions listed above, as each and every one of them is sure to interfere with your everyday life – it will change schedules, take people’s free time and prevent them from creating healthy relationships in their lives.

Consumer Watchdog Vows to Fight for Privacy of Internet Users